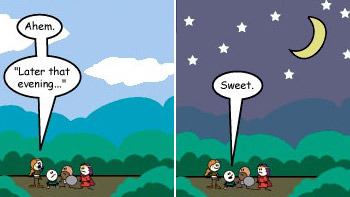 "Did you try to play the Sun's Song? Like I told you before, with that song, you can turn day to night or night to day whenever you want."
— Royal Composer Brother, The Legend of Zelda: Ocarina of Time
Advertisement:

When an In-Universe Game Clock forces the player to wait for several minutes in the game to progress to the next task, you're going to have angry gamers. How do you solve this issue? Add a time skip device! One use and the wait time will pass in an instant.

Frequently a spell or a song, the player needs only to punch in a sequence or click on the designated object and the clock will skip ahead (or sometimes, even backwards) in increments that are convenient to time-oriented missions. Sometimes RPGs may offer your party a "rest" or "sleep" command which allows you to fast-forward the game clock (and regenerate some HP in the process). This is often a case of Gameplay and Story Segregation, since time usually doesn't pass in any other sense.