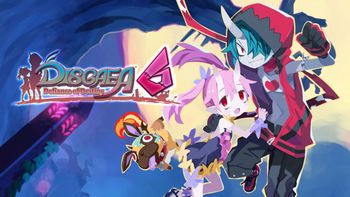 JRPGs are gonna get a serious punch in the throat!
Disgaea 6: Defiance of Destiny is the seventh game in the silly and over-the-top Turn-Based Strategy series Disgaea, developed by Nippon Ichi.
Advertisement:

The story follows a zombie kid named Zed, who comes back to life stronger every time he dies. Accompanied by Cerberus, a talking zombie dog, Zed is launched between different worlds as he embarks on his quest for power to face an imminent threat posed by an entity known only as the "God of Destruction".

The game was released in Japan on January 28, 2021, while the international version came out on June 29, 2021. Notably, the game was made for the Nintendo Switch and PlayStation 4, but the latter is currently a Japan only release. Disgaea 6 Complete was announced on February 10, 2022. Similar to previous Disgaea Complete games, it features all previously released DLC and will be released sometime in Summer 2022. Including PS4 and Playstation 5, it will also be released on PC.