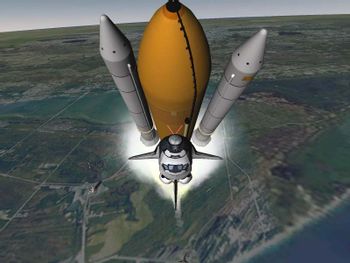 is a diamond-hard realistic Simulation Game involving spacecraft and spaceflight in general. It was created by Cambridge tutor Martin Schweiger for educational and entertainment purposes. The simulator has been in development roughly since 2000, and the latest stable version is Orbiter 2016, released on August 30, 2016. The last version, Orbiter 2010 (Patch 1), was released exactly six years earlier.

Make no mistake, Orbiter is no fast-flyin' laser-shootin' space sim. Think of it rather as Microsoft Flight Simulator meets Planetes.

The game is freeware, so if you feel interested in it and aren't scared by a steeper learning curve, you can grab it here

. In addition to this basic game pack, there are literally tons and tons of (equally freeware) fan-made mods that expand the game in virtually every way: Adding new launchers, spacecraft, spaceports and space bases, scenarios and campaigns, texture and graphic updates, even entire planets and solar systems, and new HUDs for the ship's onboard computer... They can be found here

Not to be confused with Orbitor 1.

It is also notable for averting these space-related tropes :