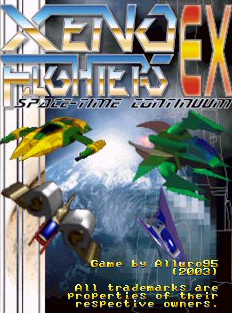 Not pictured: all the Guest Fighter ships.
Xeno Fighters is a freeware Shoot 'Em Up fan game developed by Team XF. It draws from Raiden Fighters primarily, but references to and bosses from other shooters are rife throughout the stages.
Advertisement:

The Shmups forums thread, which is the original online discussion about the game's development, complete with download links, can be found here

Not to be confused with the Xeno Z-Fighters, the alternate timeline versions of Dragon Ball characters from the Dragon Ball Xenoverse and Dragon Ball Heroes video game series.