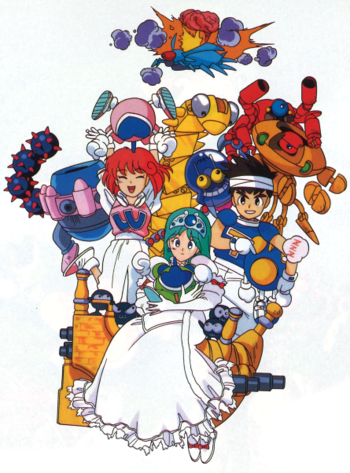 Speed up!
The motto is "-bee"! (Aikotoba wa -bee!)
—TwinBee's, and by extension the series' Catchphrase
Advertisement:

TwinBee is a long-running Cute 'em Up series by Konami, makers of Gradius. It's a much more light-hearted top-down entry into the genre, with the main ships being sentient beings with arms and legs and fighting enemies like watermelon slices and ladybugs.

Yeah, it's a weird game.

In its original format, only one of the games managed to be released in North America — Moero TwinBee: Cinamon Hakasei wo Sukue became Stinger upon translation. Unfortunately, that one is widely considered to be the weakest in the series, which resulted in none of the games getting exported for a long time. Much to the United States' detriment, of course, as later games managed to make some great improvements to the basic setup (including a Life Meter and a plot).

However, the series is finally starting to see the light of day in the United States: Konami first released the original game as Rainbow Bell as a part of their Konami Arcade Classics collection for the Nintendo DS and some of the games are starting to appear for purchase on download services for each console.

There was also a radio drama version named TwinBee Paradise which aired following Pop'n TwinBee, which was popular enough in Japan to last three seasons and a five-episode OVA series.