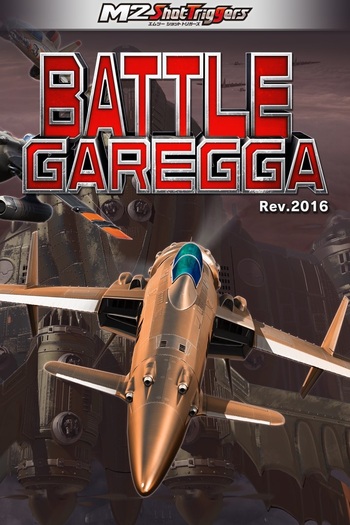 The reality of war unfolded right before the brothers' eyes, forcing them to face the truth, and their own naivety.
"They created the ultimate weapon...and now, it has become their ultimate enemy."
— Tag Line, Limited Run Games edition
Advertisement:

Battle Garegga is a vertically scrolling Shoot 'em Up arcade game released by 8ing/Raizing in 1996.

Mathew Wayne, a great mechanical engineer, lived in a small country town where he owned a small automobile factory. His young sons, Brian and Jason, were influenced by his work. The sons were taught by his father every trick of the trade of becoming a mechanical engineer as great as he was. A few years later as their father retired, Brian and Jason took over the operation of the factory. As years rolled by, words of their vehicle designs and high technical capabilities passed from one town to another until it reached the ears of the federal government. After talks with the managers of the federal weapons development, the Wayne brothers accepted a large contract to develop a new line of military vehicles and weapons for them. Their creations were years ahead of anything else like them in the world.

One morning, the sky turned dark by the oncoming fleet of planes and the echoes can be heard from a far distance. The weapons and the vehicles that the Wayne brothers originally developed for the federation destroyed every town and city in their way - including their own. Seeing that their weapons had enabled the federation to expand through conquest and had claimed many victims in the process, Brian and Jason complete four powerful prototype planes whose designs they never submitted and set off to destroy the weapons they helped create.

On the surface, Battle Garegga seems like an ordinary military-themed shooter. You pilot one of four different ships, shoot down enemies, upgrade your main shot with items, and have up to four Attack Drones that fire alongside of ship and which can be configured into multiple formation types. However, the main highlight of this game amogst shmup enthusiasts is its "rank" system. As you play, the game's rank increases, and the game gets more difficult, with enemies firing faster and denser attacks and items dropping faster. Furthermore, nearly every single action by the player influences the rank, mainly firing their weapons and collecting items, and the only way to reduce rank is to die. Without managing rank deliberately and carefully, Garegga easily becomes one of the hardest shmups in arcades. On top of that, the game's scoring system is more in-depth than it seems; certain bosses and their parts award more points if defeated with certain types of weapons, collecting medals without missing them awards increasing points making them one of the main sources of score, and firing Smart Bombs at the scenery can uncover treasure troves of items. Scoring well in this game is necessary, as points award extra lives...so that the player can suicide them to keep the game's rank at a level managable to them. Finally, the game is known for its gritty, low-contrast color style, being realistically brown, with even the bullets often being low-brightness gray or olive-colored. Because of all this, Garegga has been called a masterpiece of shmup design, a heaping pile of Fake Difficulty, and everything in between.

A Sega Saturn port was released exclusively in Japan in 1998, which adds a few new features. An Updated Re-release by M2 as part of the M2 ShotTriggers series of ports and in celebration of the game's 20th anniversary, Battle Garegga Rev.2016, was released on December 15, 2016 on PlayStation 4 in Japan and on October 4, 2017 in the rest of the world, and globally on Xbox One on September 29, 2017.