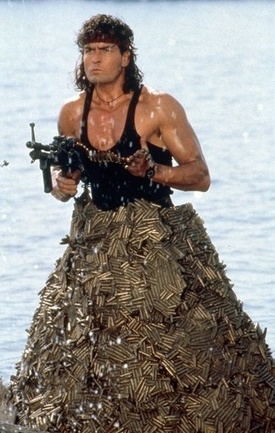 "Sitting in a Humvee while the machine gun on top is tearing a seam into hell is an experience - hot brass and links raining down into the passenger compartment like a Skittles commercial for infantrymen."
— Just Another Soldier: A Year on the Ground in Iraq
Advertisement:

One way to emphasize More Dakka, or at least how powerful a weapon is, is showing all the bullet casings being ejected out of that gun. Expect this to be noisy.

In scenarios involving Humongous Mecha, the falling bullet casings from said mecha's guns can be large enough to present a danger to whoever and whatever is unlucky enough to be under them.

Compare Dramatic Gun Cock. Contrast Cartridges in Flight, for when the shells are fired out along with the bullet in precisely the way real-life ones don't. When combined with Bottomless Magazines, may raise the Fridge Logic of where all that ammunition was before it was fired...

After dealing with the people behind the bioterrorist attacks, Ada ties up a few loose ends by destroying all evidence of "Project Ada".

Example of:
Destroy the Evidence

After dealing with the people behind the bioterrorist attacks, Ada ties up a few loose ends by destroying all evidence of "Project Ada".