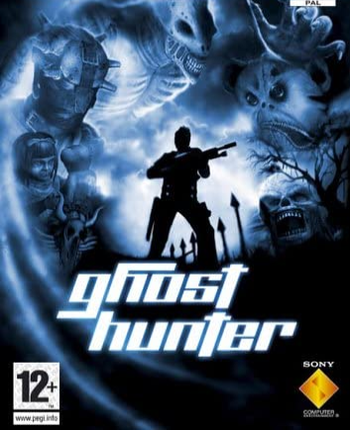 "It's a living hell - minus the living."
Advertisement:

"There are thousands of ghost stories, tales of loss, suffering and rejection - into a few - intrude the living."

Ghosthunter is a survival horror video game developed by SCE Cambridge in 2003. The game has a lot more humor and less violence than the average survival horror, earning it a T for Blood and Violence, when the usual survival horror is rated at least M. Like the Fatal Frame series, it's unusual in pursuing ghosts instead of zombies or Body Horror monsters.

Play alternates between snarky police officer Lazarus Jones and Astral, a spirit girl. Astral can only summoned at special circles. Astral is cute but mute.

Use firepower, capture ghosts with a ghost grenade, solve puzzles, use stealth, snipe from cover, wade chest deep in swamps and sewers, and use Astral, the lovely spirit companion draped in a thin sheet.

Video modes include 16:9 ratio. Also supports Progressive Scan when booted with the X and Triangle key held down. Progressive Scan requires component cables and a TV capable of supporting it without damage. This did not prove to be a major marketing point.