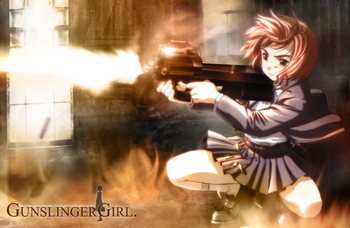 "The girl has a mechanical body. However, she is still an adolescent child."
Advertisement:

Gunslinger Girl is a manga created by Yu Aida, which also received two anime adaptations, telling the story of a group of young girl assassins.

In Italy, the Social Welfare Agency scours the country for little girls who have been traumatized or abandoned, ostensibly to give them a second shot at life. In reality, the Agency (as it is usually called) subjects the girls to cyberization, drugs, and brainwashing, and uses them to do the government's dirty work. Each girl in the Agency is partnered with a male handler to form a unit called a "fratello". The girl's handler oversees her training, determines the level of drugs and conditioning she receives, and is ultimately her control when out on a mission.

The stories focus on relationships between the girls and their handlers. These relationships range from handlers who care for their charges like daughters or little sisters to others who regard them merely as disposable tools. The stories of how the girls come into the custody of the Agency are routinely horrific. (Henrietta, the new arrival, had her family murdered in front of her and was then assaulted all night by the intruders before being mutilated and left for dead. What happened to Triela was even worse.) The girls' cybernetic implants, as well as the drugs and conditioning they receive, are killing them while slowly destroying their minds and personalities. None of them will see adulthood. Despite this bleak backdrop, the show is interesting for its fairly nuanced and even-handed approach to these relationships and the girls' situation as child soldiers — while it does not glamorize the girls-with-guns concept, neither does it wallow in cynicism or mawkishness and treat their lives as entirely despairing black tragedies. Instead, the series has a tinge of optimism: of the girls finding solace and worth in their new situation where they can.

The manga began publication in Dengeki Daioh magazine in 2002 and finished in October 2012 with 100 chapters in 15 volumes. Two separate anime seasons were produced in 2003 (by Madhouse) and 2007 (by Artland). Both seasons of Gunslinger Girl's anime series were licensed and released in the US and Canada by Funimation. The manga has been continuously published in French, Italian and German, but the English version was more troubled: six volumes were released by ADV on an erratic schedule, then lapsed when ADV shut down its manga division before the company folded entirely. Seven Seas Entertainment revived the English license and began republication of the manga with a new translation from February 2011, this time compiling the volumes into omnibuses. Both the anime and manga are well worth your attention but prepare yourself for a moody introspective on mortality and identity mixed with gun battles.

The sequel/second season Gunslinger Girl: Il Teatrino gets a crossover with Girls' Frontline, which features all of cyborg girl protagonists including the dead ones.

The manga has the following tropes:

Example of:
Girls with Guns