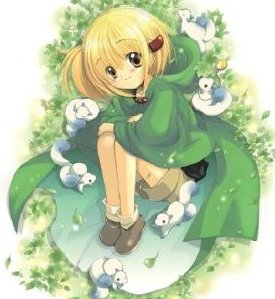 Hibiki's Magic (Hibiki no Mahou) is a fantasy Manga series centering around a young girl named Hibiki. This manga is a collaboration between writer Jun Maeda, mostly known for his contributions to many Key/Visual Arts visual novels, and Rei Izumi, artist for .hack//Legend of the Twilight.

Hibiki is the apprentice to a skilled wizard by the name of Shirotsuki. Hibiki has absolutely no talent for magic, though, and her only real skill is making tea. Despite this, she serves and studies with her teacher everyday in his humble research facility in the woods until one day, one of his magical experiments goes horribly wrong. The facility burns to the ground, Shirotsuki's soul becomes trapped within the body of a gusk (a squirrel-like animal) and Hibiki is essentially forced to fend for herself. With nowhere left to live, she goes to the big city, and finds herself taken in by the famous Kamisaid Magic Academy, where Hibiki is (forcibly) granted the position of professor. And thus begins her journey into the world of magic...

Hibiki's Magic, while considered cute and Moe, breaks free of this appearance by delving into the darker side of magic and its consequences for magicians and normal people alike. Major themes throughout the work focus on love and deep bonds between people, sadness, inspiration, and hope.

The manga began in Shonen Ace in 2004, but later switched to Comp Ace in 2005. It had a lengthy hiatus from 2007 to 2013 (during which only three chapters were published) before finally concluding in 2016. The manga's chapters were compiled into six volumes, but only the first two were released in English due to the long hiatus. These were distributed by Tokyopop.