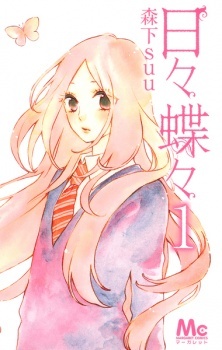 Shibazeki Suiren is a stunningly beautiful girl. When she joins high school, most of her classmates are ashtonished by her beauty, but after noticing her quiet manners and lack of contact with anyone else except her friends Yuri and Aya, she receives the nickname "Takane no Hana" (lit. "Flower in a Peak"), a beautiful being but impossible to reach. However, after a fellow freshman called Kawasumi Kouha saves her from a suitor, she finds herself mesmerized by him... as he's the only boy who won't look at her no matter what.

A sweet romance manga about a couple of Twice Shy high school students, Hibi Chouchou (lit. Daily Butterfly) is a shoujo manga by Suu Morishita which was serialized in the biweekly magazine Margaret from February 2012 to June 2015, later compiled into 12 volumes. The series has been licensed in France by Panini and in Germany by Altraverse.