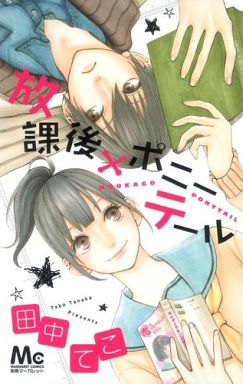 Houkago X Ponytail is a short Romantic Comedy manga written by Teko Tanaka. It was serialized in the shoujo magazine Bessatsu Margaret in 2012.

Natsuki, an otaku high-school girl who'd rather spend her money on manga than pretty dresses, accidentally injures a creepy-looking mangaka named Kiritani Taichi. To repay him, she agrees to be his character model until he fully heals. Kiritani turns out to be a popular shoujo mangaka under the name Ichijou Kiriko, who is also Natsuki's favorite author! Plus, underneath that disheveled hair Kiritani is actually a good-looking man! What will become of these two?