Manga / House of the Sun 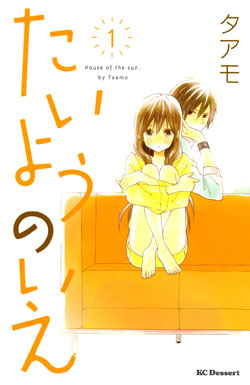 "Back in the day, that place was a house filled with magic—a place where you ended up smiling even if you were crying. Surely, an invisible wizard must have lived there. Or so I thought."
Advertisement:

House of the Sun (Japanese title: Taiyō no Ie) is a Shoujo slice-of-life manga series by Taamo. It was serialized in Dessert from 2010 to 2015.

Mao Motomiya spends most of her time with her neighbors, the Nakamura family, rather than at her own home, as her parents are constantly working for her sake and are rarely home.

When her parents get a divorce and she is conflicted with choosing between them, the eldest son of the Nakamura family, Hiro, suggests for her to live with them. Though secretly glad, Mao rejects the offer and chooses to stay with her father. In spite of moving two stations over, Mao continues to visit the Nakamura family until the death of Hiro's parents... Hiro's younger siblings Daiki and Hina are taken in by relatives in Kobe and Sendai respectively, and only Hiro remains in the Nakamura house.

Nine years pass, and Mao, now aged 17, is in high school and lives with her emotionally-distant father, her stepmother, and the latter's young daughter. She continues to check up on Hiro, who is now 24 years-old and has a job as an entry level programmer, every now and then, but the stress of adjusting to her new family life causes Hiro to ask again if she'd like to move in with him. This time, Mao agrees.

The series won the 2014 Kodansha Award for Best Shoujo Series, and is available digitally in English through Kodansha USA.