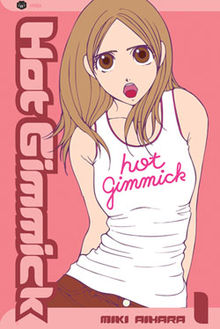 Hot Gimmick is a 12-volume Shōjo manga by Miki Aihara, serialized in the Shogakugan magazine Betsucomi from 2000 to 2005. The English release is currently published by Viz Media under its Shoujo Beat label.

The story revolves around Hatsumi Narita, a passive sixteen-year-old girl who lives in a company housing complex that is ruled by the tyrannical Mrs. Tachibana, the wife of the company's vice president. How a family behaves in the housing complex can affect an employee's status in the company. When her promiscuous younger sister Akane thinks she might be pregnant, Hatsumi gets talked into buying her a pregnancy test. Unfortunately, things don't go exactly as planned and Hatsumi is blackmailed by Ryoki Tachibana, the arrogant teenage son of the powerful Tachibana family who bullied her as a kid, into being his slave. This situation troubles Hatsumi even more when Azusa, her childhood love, comes back and expresses romantic interest in her...

The series received a live action adaptation movie in 2019, with Miona Hori and Hiroya Shimizu in the leading roles, which saw international release on Netflix. A sequel novel written by Megumi Nishizaki, Hot Gimmick S, was released after the end of the manga and further explores Hatsumi's love life. The novel is also translated and published by Viz.