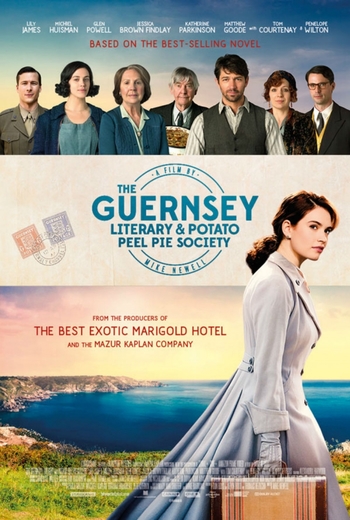 "A real writer, come to see us!"
"Do you think it's possible for us to already belong to someone before we've met them?"
Advertisement:

It is 1946. Juliet Ashton (James) is an up-and-coming London writer fresh off the success of her new book and struggling to cope with the loss of her parents in the war. She receives a letter from Dawsey Adams (Huisman), a farmer from Guernsey, who introduces himself as part of the "Guernsey Literary and Potato Peel Pie Society" and asks for her help in locating a book. From this, they strike up a correspondence. Juliet is intrigued by the formation of the Society and since she has to write an article about the benefits of reading, decides to pay them a visit. She is charmed by Guernsey and the titular book club's other members — elderly postman Eben (Courtenay), lonely romantic Isola (Parkinson), and stern but motherly Amelia (Wilton) — but eventually becomes curious about the whereabouts of the last founding member, Elizabeth (Brown Findlay).

A British-French production, the film was released in the United Kingdom in April 2018 and in France in June 2018. Netflix released the film in other international areas in August of the same year.