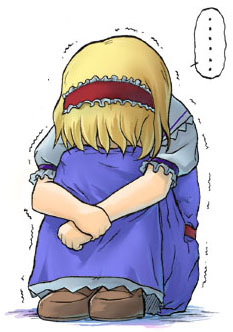 Alice is not having a good day.
"Actually, I'm going to lie down in the fetal position and weep."
— Fastidiious, Sonic Boom
Advertisement:

A common sitting position for an introverted, shy, depressed character or perhaps one that is going through a breakdown or some Sanity Slippage is for them to sit with their knees pulled to their chest perhaps with their arms wrapped around their knees. Similarly, the character can lie down (or slide down in extreme cases), curl up and hold their knees. If the character has gone through something traumatic, expect them to rest their head atop their knees so that their hair falls around their face. Sometimes, they may rock their body back and forth while muttering something incoherent. When Played for Laughs, they may also suck their thumb like a baby. Someone taking a Shower of Angst is likely to do this.

Different from the Corner of Woe in that this trope is usually done in a dramatic fashion; could also be done as a result of coping with some Paranoia Fuel or Nightmare Fuel.

Truth in Television, this is a natural defensive reflex against physical attack (it protects your belly, throat, and eyes) and by extension against many sorts of psychological stress and trauma, in the same manner that both physical and psychological trauma can prompt an adrenaline rush.

Compare Cradle of Loneliness, which may involve a similar position, but are brought on by loneliness rather than trauma, though there can be overlap between the two.

Contrast with Fetal Position Rebirth, where the pose conveys a different symbolic meaning from angst.

After discovering that Belos is after him, Hunter has a panic attack and curls up into a ball while hyperventilating. Gus helps him to calm down by guiding him through a breathing exercise.

After discovering that Belos is after him, Hunter has a panic attack and curls up into a ball while hyperventilating. Gus helps him to calm down by guiding him through a breathing exercise.