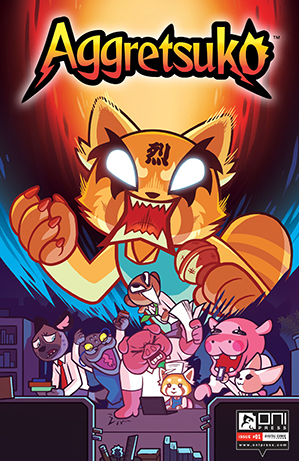 Aggretsuko is a comic series that's based on the Aggretsuko anime and published by Oni Press.

The series follows Retsuko, the Red Panda, as she continues to deal with the struggles of being young. Armed with her trusty karaoke microphone and with the help of her friends, she may just be able to overcome the challenges of her job, her relationships and may just find what she’s been searching for – love.

After the comic's initial six-issue run, it will be followed up by a new series titled Aggretsuko: Meet Her Friends, which focuses on various side characters of the series.