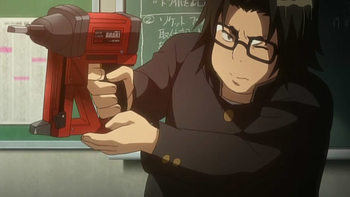 Nail guns are a common Improvised Weapon in fiction. Generally, they are portrayed as being analogous to firearms that shoot nails instead of bullets, while in Real Life, nail guns have a safety mechanism explicitly to prevent this - it must be pressed in direct contact with a surface to fire (meaning you can't just pick one up and, say, start blasting zombies with it).

Even if you did bypass said safety mechanism, nails aren't as aerodynamic as rifled bullets, so they don't have the accuracy or range that makes real firearms so deadly. They make better melee weapons since a nail gun is a blunt object that can stick out a long spike on contact, but this is rarely represented in fiction. Still, never point a nailgun at someone - the safety mechanism can malfunction and if the nail does hit someone it can inflict serious injury.

The MythBusters tested this one and declared it "Busted" because while its accuracy was surprisingly good up to about 15 feet, a nail gun's penetration and stopping power are nothing compared to those devices actually designed for this function.

Although certain media would just drop the idea of using existing nail guns and just focus on creating fictional firearms that fire nails instead.

This trope can also cover the use of rivet and staple guns as weapons. Subtrope of Spike Shooter. This trope has no relation to wooden Baseball Bats nor 2x4s with nails or spikes hammered through them.