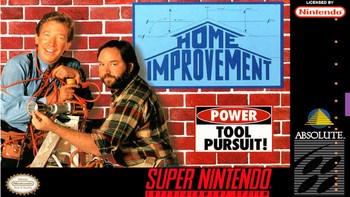 1994 licensed Platform Game for the Super Nintendo Entertainment System, based on the sitcom Home Improvement. A Sega Genesis version was planned, but never released.

Tim Taylor's Tool Time is going pretty well, but just as Tim about to unveil the new Binford ultra power tool line named after him, the Binford-Taylor Turbo Power Tool Line, he discovers they are missing, with a mysterious note left by the thief challenging Tim to find the power tools. So the mission is on. With power tools in hand, its up to Tim to explore different film sets around the studio and recover the missing power tools and save his show.

Power Tool Pursuit! is a 2D platformer. You play as Tim "The Toolman" Taylor as he explores different studio sets, fending off enemies and other dangerous foes with his multitude of tool weaponry. Tim's greatest attribute is his tool arsenal: He can use nail guns, blowtorches, jackhammers, hammers, electric rail guns, and more. Each tool/weapon has their own particular function, like busting through walls or striking smaller enemies. The mission of each stage is to find five crates, with contain missing pieces of the power tools. Levels are very large and spacious with lots of nooks and crannies.