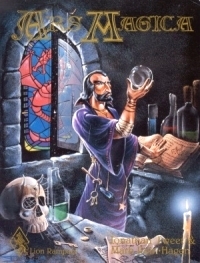 Ars Magica is a role-playing game set in Mythic Europe, a quasi-historical version of Europe around AD 1200 with added fantastical elements. It typically centers on the lives of Magi, powerful wizards belonging to the Order of Hermes, and the various mundane folk in their lives. While several details about the world change, sometimes drastically, from edition to edition, the same basic premise applies: the Order is a secret society in a world that believes in magic, founded by the apprentice of a wizard who first developed a unified magic theory and a general defense against magic, the Parma Magica. There are twelve Houses (with a missing thirteenth), each focusing on a particular area of study that the House founder excelled in originally. As of 5th Edition, each of the Houses is also grouped into one of three structures: True Lineages (members must be able to trace their Master-Apprentice Chain back to the House's founder), Mystery Cults (members must be initiated into the House via special rites), and Societates (anyone who shares the House's ideology may join). The Houses are as follows:

The Order of Hermes itself is richly political, with laws governing how Magi must conduct themselves toward each other while at court (Tribunal) and just in general, with secrecy and the right to power being primary tenets of the vow taken by mages at the completion of their apprenticeship.

It was one of the first examples of a Troupe system: early editions recommended that the players collaborate to create the campaign world and story. Each player would have an opportunity to be the Story Guide, and each player would have more than one character, so that if they felt their main character would not go on an adventure (for example, if they were busy with their research) a secondary character may be used. The game was developed by Jonathan Tweet and Mark Rein·Hagen of World of Darkness fame and if you look, you will find traces of Ars Magica in the Classic WOD — particularly the Order of Hermes mages and the Tremere vampires. The magic system of Ars Magica is generic, based on a combination of Forms and Techniques (to create fire, you'd use the form Ignem for fire and the Technique Creo for create together) and very intuitive. It's also one of the few magic systems that allowed for spontaneous spellcasting, allowing the player to use magic off the top of their head to perform specific tasks, rather than limiting magical ability to a shopping list of immutable conditions and effects.

Had an unsuccessful Kickstarter

towards a computer game version.