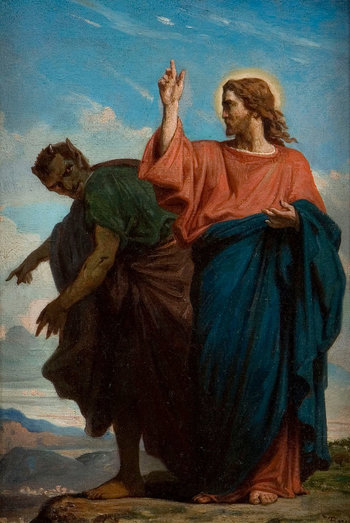 C'mon, Satan, God's this way.
"In your religion and all the religions, as far as I know (and I know everything), the sky is made the symbol of everything that is sacred and merciful."
— Professor Lucifer, The Ball and the Cross
Advertisement:

The sky is equated with things pertaining to the divine.

Whether it be the Lord, the gods, fate, or the afterlife, nearly any supernatural concept can be brought to mind by mentioning "the heavens," holding one's hands together and looking upwards, or showing clouds flying across a starry sky.

There isn't one single origin of this trope, since the sky's association with the unknowable or transcendent comes from humanity's natural awe of the stars and ignorance of what they truly are. So if you want to indicate something beautiful, distant, and far greater than man, the sky is nigh-universally the best symbol to use.

Related to Light Is Good, since the bright sky and the light-bearing suns often go hand-in-hand when depicting God. This trope's relationship with the sun can often lend it to be used similarly to Rays from Heaven, Cue the Sun, and Watching the Sunset. This trope will often be used to show a Rage Against the Heavens by having a character rant at the clouds as if God was hiding behind them.

This trope is why the name for an afterlife of eternal joy is called Heaven (hence the redundant article name) and Heaven's most popular sub-trope is Fluffy Cloud Heaven, where Heaven looks just like the heavens. Other sub-tropes include Divine Birds, Stars Are Souls, and other tropes connecting the skyward with the sacred.

This association is also why Winged Soul Flies Off at Death, why people only Ascend to a Higher Plane of Existence, why there's a Stairway to Heaven, why so many works invoke Ending by Ascending, and why those mad at their fate will generally give a Skyward Scream rather than a Horizon-Oriented Yelp.