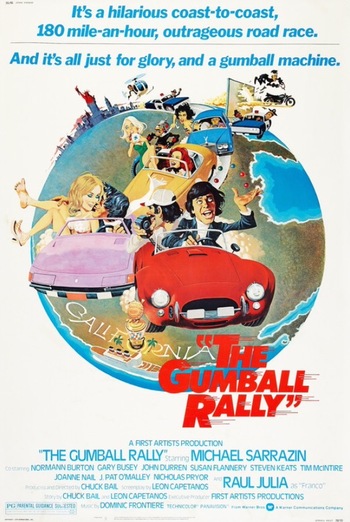 "Ladies, gentlemen, you have been selected because you have the necessary skills. You are here because you have the determination to succeed. Now, it won't be as easy as last year. There are some who will use any means to try and stop us. Some of you won't make it. For those of you who do, there'll be no glory, no headlines...but just a few magic hours flat out against the red line with no catalytic converter and no fifty-five mile an hour speed limit. Ladies and gentlemen, the Gumball Rally has begun!"
— Michael Bannon, commencement speech
Advertisement:

Wealthy but bored businessman Michael Bannon (Sarrazin) issues the code word "Gumball" to his fellow automobile enthusiasts, who gather in a garage in New York City to embark on a coast-to-coast road race "with no catalytic converter and no 55-mile-per-hour speed limit." Their nemesis, LAPD lieutenant Roscoe (Burton), also learns of the race and most of the film is devoted to the misadventures of the various driving teams and Roscoe's ineffectual attempts to apprehend them. Hilarity Ensues.

The race ends at the Queen Mary in Long Beach, California, where the finishers celebrate their adventures and the defeated Roscoe skulks off to one side—until a fleet of police cars and tow trucks arrive to impound the vehicles; as it proves, Roscoe had contrived in advance to see to it that all of them were illegally parked. Bannon congratulates Roscoe on his final victory, and again utters the code word "Gumball" to initiate a race back to New York.

Compare The Cannonball Run; both films were inspired by the same real-life outlaw race

The Gumball Rally provides examples of: