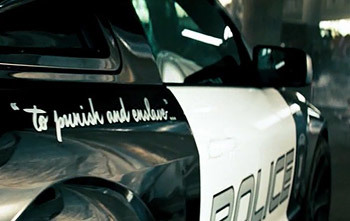 The Los Angeles Police Department's famous motto, "To Protect and to Serve" (coined in 1955), has been adopted by many other police departments across the English-speaking world, sometimes in its alternate form "to serve and protect." It's been adopted by so many police departments, in fact, that it's practically a Stock Phrase in the English-speaking world. Unsurprisingly, it shows up a lot in fiction as well. Played straight in most Police Procedurals and Cop Shows, it's routinely subverted, lampshaded, and/or otherwise played with in other media.