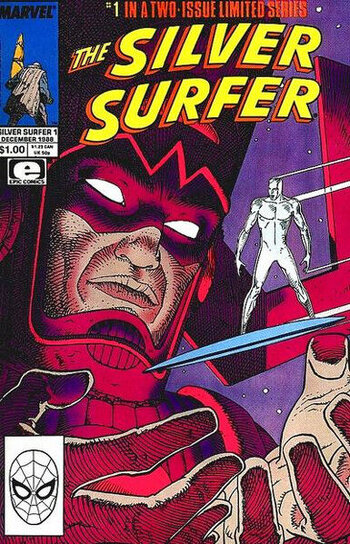 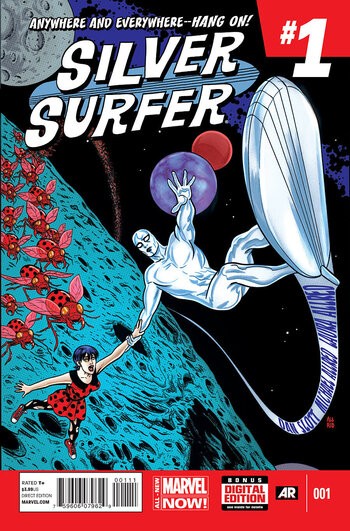 The cover to vol 7, #1 by Mike Allred.
Where soars the Silver Surfer... There must he soar—alone!
Norrin Radd, Silver Surfer #1
Advertisement:

The Marvel Comics character of the Silver Surfer has eight self-titled series so far.

Silver Surfer Vol 1 (1968–1970) was an ongoing series by Stan Lee and John Buscema. It's served as a spin-off of Lee and Kirby's Fantastic Four, with the Silver Surfer recalling his origin in the first issue, coming from Zenn-La and his first love, Shalla-Bal. The Surfer continued to be stuck on Earth, thwarting alien invasions, and stopping villains (like Mephisto, who makes his first appearance in the third issue). The Silver Surfer's creator, Jack Kirby, finally got to do an issue, #18, however, this turned out to be the book's final issue.

Silver Surfer Vol 2 (1982) was a one-shot by Stan Lee and John Byrne. It featured the Silver Surfer finally breaking free of Galactus's barrier with the help of the Fantastic Four and returning to Zenn-La...which is now a barren wasteland, thanks to Galactus. Also, it turns out that Mephisto still has Shalla-Bal and the Surfer must save her and help restore Zenn-La.

Silver Surfer Vol 3 (1987-1998) was an ongoing series by Steve Englehart and Marshall Rogers. In return for saving his new herald Nova, Galactus finally gives the Silver Surfer his freedom, allowing him to surf the spaceways again. This series was slightly more successful than the previous one, lasting for 148 issues. Issues #32 and #33 were written by Jim Valentino before the book was handed off to Jim Starlin, who began his run with the "Rebirth of Thanos" storyline. This then lead to "Thanos Quest" and then The Infinity Gauntlet, making a huge impact on the rest of the Marvel Universe. As Starlin moved on to writing that crossover and Infinity Watch, Ron Marz took over the book with issue #51. This then led into The Infinity War and The Infinity Crusade crossovers. Marz also introduced Genis-Vell, the son of the deceased Captain Mar-Vell, who would go by Legacy before getting his own book. After Marz left the book, it was written by Glenn Greenberg, Mike Lackey, George Perez, and J.M. DeMatteis. The last issue, #146, was written by Glenn Greenberg and Tom DeFalco.

Silver Surfer Vol 4 (1988–1989) was a two-issue mini-series by Stan Lee and Moebius. Done primarily to show off Moebius's artwork, it was still considered a classic and one of Lee's favorite stories. It was published through Epic Comics due to its format.

Silver Surfer Vol 5 (2003–2004) was an ongoing series written by Dan Chariton and Stacy Weiss, with art by Milx. Introducing young mother Denise Waters and her autistic daughter Ellie as new supporting characters, it lasted for 14 issues.

Silver Surfer Vol 7 (2014–2016) was an ongoing series by Dan Slott and Mike Allred. The Silver Surfer ends up saving Dawn Greenwood, a woman whom he is told is the most important person in his life, but whom he doesn't know yet. Dawn becomes the Surfer's companion as they travel the universe. Basically, it's Doctor Who with the Silver Surfer. It lasted 15 issues until it came to an end with Secret Wars (2015) and then led into...

Silver Surfer Vol 8 (2016–2017) was a continuation of the previous series, still by Dan Slott and Mike Allred. It also featured the 50th anniversary of the Silver Surfer, which involved Shalla-Bal and Zenn-La invading Earth. The series came to a bittersweet end after 14 issues.

Silver Surfer: Black (2019) was a five-issue miniseries by Donny Cates tying into his Guardians of the Galaxy and Venom runs, with Norrin getting catapulted billions of years into the past and fighting the symbiote god Knull.