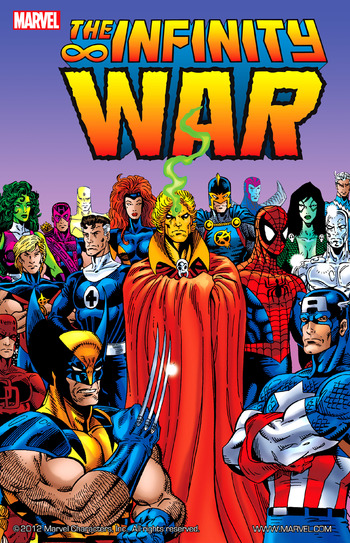 Loads of characters... and the actual hero of the story is not even there.
The Infinity War is a six-issue limited series published by Marvel Comics in 1992; it was written by Jim Starlin and pencilled by Ron Lim. It was a Crisis Crossover that served as a sequel to The Infinity Gauntlet.
Advertisement:

In the previous story, Adam Warlock subconsciously expelled both good and evil from himself so he could wield the Gauntlet's power using logic alone. His evil side became a new incarnation of Warlock's evil persona, the Magus. The Magus creates evil doppelgangers of Earth's superheroes and, like Thanos before him, tries to assemble the Infinity Gauntlet. His machinations involve Thanos, the Infinity Watch, Galactus, earth's mightiest heroes... and Dr. Doom and Kang, that he never thought about, but got themselves involved anyway.

The story is followed by The Infinity Crusade.

While the 2018 event Infinity Wars has a name that suggest a sequel, happens in the same universe, and involves many of the same characters; Wars isn't a continuation of this event or Crusade. The film Avengers: Infinity War also shares the name but has little to do with the plot of this event either, being actually based on its predecessor The Infinity Gauntlet. It's named the same just because of Rule of Cool.