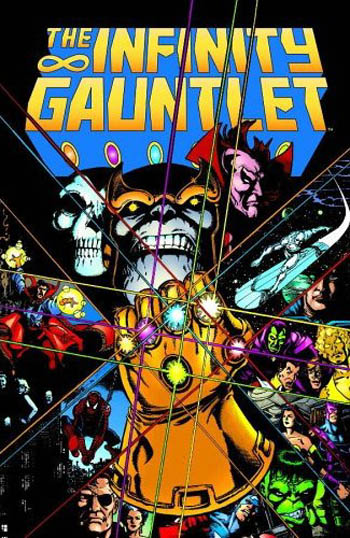 The End Begins Here!
"There can be no denying it. You are supreme. Anything you wish to be, you are. Anything you wish, is. Nothing in the universe dares challenge that claim. There can only be one word to describe you...
GOD."
— Mephisto
Advertisement:

The Infinity Gauntlet is a six-issue limited series published by Marvel Comics in 1991; it was written by Jim Starlin and pencilled by George Pérez (#1–4) and Ron Lim (#4–6). Its success, both critical and financial, cemented the reputations of everyone who worked on it.

Before the story begins, Thanos, the mad Titan, has collected the Infinity Gems—six cosmic MacGuffins that grant their wielder great power over a different part of the universe (Time, Space, Mind, Soul, Power, and Reality). When Thanos puts them all on his glove, they create the Infinity Gauntlet, which gives him power over basically everything. Thanos had long been in love with the incarnation of Death after having been resurrected; The Infinity Gauntlet is literally about Thanos trying to use his godly power to court Death. When Death refuses to even acknowledge Thanos's newfound power, the Titan steps up his game by erasing half the population of the entire universe with a mere thought. Entire worlds and civilizations are torn asunder by Thanos's power—including Earth, which faces assumed annihilation as a result of power unleashed by the Infinity Gems.

Earth's remaining heroes (and a few villains) soon come together to plan an attack against Thanos, hoping to catch him off-guard and stop him before he destroys all existence. Aiding Earth's attack force is Adam Warlock, who had been trapped inside one of the Gems and knows Thanos better than anyone save Thanos himself. (Warlock's plan is more of a distraction than an actual attempt to stop Thanos; he knows the heroes are doomed to fail.) Across the universe, other cosmic beings—including Galactus—prepare their own coordinated attack on the mad Titan.

When Earth's assault begins, Thanos uses all the powers of the Gems to lay waste to his attackers. In the midst of battle, he is convinced to turn off most of the gems just to prove he can still do a lot of damage with just one. After he defeats the last of Earth's forces, the cosmic entities try to have their way with him—but Thanos outpowers them all and soon takes the place of Eternity...

Infinity Gauntlet spawned an ongoing series, Infinity Watch, and two more miniseries that ultimately created a trilogy, and another miniseries with the same name that tied into Secret Wars (2015); A young girl named Anwen Bakian discovers one of the Infinity Gems on Battleworld. She soon ends up embroiled in a conflict involving Thanos and Star-Lord, and becomes a member of the defunct Nova Corps.

It also received an adaptation for Marvel's all-ages line, written by Brian Clevinger.

Infinity Gauntlet was loosely adapted into two video games by Capcom. The first, Marvel Super Heroes: War of the Gems, is a Beat 'em Up/Platform Game for the SNES. The second, Marvel Super Heroes, is an arcade Fighting Game; it followed X-Men: Children of the Atom and paved the way for the Capcom vs. series.

The Infinity Gauntlet storyline — along with others similar to it — also serve as the underlying basis for Marvel's 2018 movie Avengers: Infinity War and its 2019 sequel Avengers: Endgame.