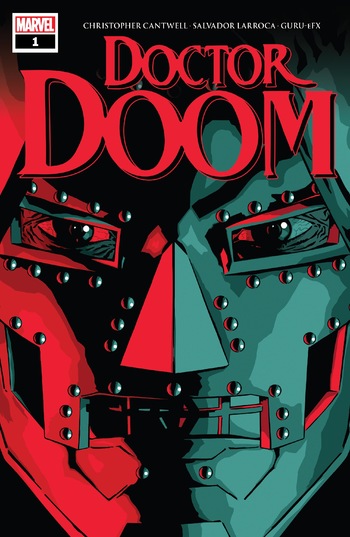 Who dares to place a cover of this comic book?
Doctor Doom is a 2019 comic book by Christopher Cantwell and Salvador Larroca, starring Doctor Doom (duh... did you expect Richards?).
Advertisement:

Reed Richards and Tony Stark created a machine, the Antlion Control Center, that solves the problem of global warming. Dr. Doom was interviewed in TV about it: he is sure that the project will fail in a spectacular way. In no small part because it involves making a black hole in the moon. For reasons unknown, Latveria's missiles are fired to it and to another city, causing massive casualties. Unsure of who is framing him, Doom surrenders.

The series ended after 10 issues, with Cantwell going on to write Iron Man (2020, Ongoing), though Cantwell would later write a team-up between Doom and Iron Man as a King In Black tie-in.

For the character, see here.