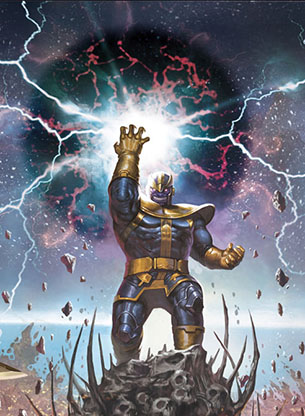 Are you really certain you want to stop him? What makes you think you can? note Pictured: Thanos before getting the Infinity Gauntlet.
"Am I not Thanos?! Did I not butcher the woman who gave me birth, who forced me into this hell called life? Is not the wake of my passing crimson with the blood of my enemies and allies alike?! Death is with me every second of the day!"
— Thanos, The Infinity Gauntlet #2

The Mad Titan. The avatar of Death. The inevitable.

Thanos is a supervillain appearing in comic books published by Marvel Comics. First appearing in Iron Man vol. 1 #55 (February 1973), Thanos the Mad Titan has become one of Marvel's most iconic - and dangerous - supervillains. Whereas the heroes of Earth have to put up with the likes of Doctor Doom and Magneto, Thanos proves to be a constant threat to, well, the entire universe. Yes, all of it.

Born on Titan, moon of planet Saturn, home to the Titans, a faction of Eternals that left the Earth thousands of years ago. Thanos is one of two sons of the rulers of the Titans: Alars, also known as Mentor, and his wife, Sui-San. However, he was born a mutant, which gave him an appearance closer to Deviants, the Eternals' sister race and sworn enemies. This made his life miserable, gave others reason to bully him, while his brother, Eros, was loved by all. On the other hand, the mutation also granted him vast strength and durability, far greater than any of the other Titans; and his ability to wield cosmic energy was second-to-none.

Claimed his first victim at the age of eight, which first introduced him to the love of his life, Mistress Death. Infatuated, it became Thanos's obsession to win over her black heart, which generally resulted in more killing. The Titans naturally didn't take kindly to this, and exiled him after he tried and failed to kill his dad and take over the throne. They probably regretted not giving him his wish and uniting him with his one true love later since after traveling the Universe and claiming all power within his reach, he returned to Titan and let them have a taste of his nuclear revenge, killing all but a few survivors - his mom being among the dead.

After setting up shop on the nearby Earth, he would inadvertently create two of his life-long enemies, including his arch nemesis: Drax the Destroyer. After possibly being spotted by a human family, he killed them, only for the sole survivor to become Moondragon and her father to be turned into Drax. Imprisoning Drax, he caught the attention of Iron Man, who answered his calls for rescue. Earth has also provided him with a number of other of his regular foes, including Adam Warlock, the Silver Surfer, and Captain Mar-Vell (not that one, mind you). These and more would be involved in stopping him from obtaining the Cosmic Cube and from using the six Infinity Gems (Then known as the 'Soul Gems') in a quest to destroy all the stars in the galaxy in his latest scheme to win over the heart of Mistress Death.

And then he died at the hands of Adam Warlock, staying dead between 1977 and 1990, when Death brought him back to life more powerful than ever in a mission to kill half of all life in the universe in the name of keeping the balance. Crafty as he was and eager to be Death's equal rather than her servant, Thanos put the six Soul Gems back together, renamed them the Infinity Gems, and created the Infinity Gauntlet in order to gain omnipotence. Ironically, this backfired by making him superior to Death, who then rejected him because of it. Driven to impress her, Thanos used the Gauntlet to try to prove himself worthy, eventually becoming the very personification of The Universe itself. Which, ironically again, was what defeated him, since it left his body unoccupied and giving his remaining foes the opportunity they needed to reclaim the Gauntlet.

Arguably giving up his old ways, Thanos made peace with Adam Warlock and joined the Infinity Watch in order to guard one of the gems, trusted to do so specifically because Adam knew that Thanos' experience with them showed him that possessing the Gauntlet would not give him what he wanted. They worked together and with others to fight against Adam Warlock's good and evil sides, Magus and Goddess.

In time, Thanos would return to his old ways and switch intermittently between hero and villain, until his next big appearance in the pages of Annihilation. Teaming up with Annihilus in his war against the Universe, Thanos was killed by Drax. Only to then be resurrected soon after for The Thanos Imperative in order to save Death from the threat of the 'Many-Angled Ones', interdimensional invaders from another universe known as the Cancerverse where nothing was able to die. A problem that, with Death's help, Thanos managed to fix. Naturally, he got angry after Death turned her back on him after it was all said and done, forcing Nova and Star-Lord to hold him back (with the help of a near-dead Cosmic Cube) to keep him from escaping back to their universe and killing everyone.

But of course, you can't keep a good megalomaniac villain like Thanos down for long, and he's returned once more anyway.

Recently, he has once again teamed up with his recently resurrected frienemy, Adam Warlock, to try to stop Annihilus and Mephisto from triggering the cessation of all of reality.

In other media, Thanos has also shown up in the Silver Surfer and The Super Hero Squad Show animated series, though with Death being replaced by Chaos in the former. He also appears as the Big Bad of Season 2 in Avengers, Assemble! and the Guardians of the Galaxy animated series.

In film, Thanos made a surprise appearance in The Stinger of The Avengers, where he was revealed as the mastermind behind Loki's plan to conquer Earth (portrayed there by Damion Poitier). He then appeared in Guardians of the Galaxy, Avengers: Age of Ultron, Avengers: Infinity War, and Avengers: Endgame, portrayed by Josh Brolin.

Who could have guessed that becoming God would prove to be such a hollow victory?