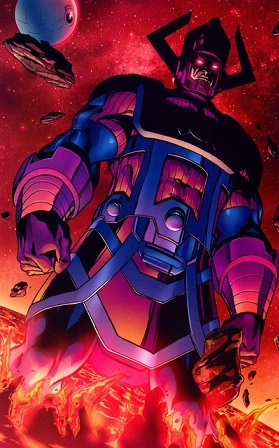 Notable Aliases: Ashta, The Devourer of Worlds, The Lifebringer, The Seeder of Worlds

"Of all the creatures in the vastness of the Universe, there is none like me. I was present at the birth of the Universe, and I shall be there at its end. Though I ravage worlds to live, I bear no malice toward any living thing. I simply do what I must to survive. And why must Galactus survive? For, no matter how many worlds I devour ... How many civilizations I destroy ... It is my destiny to one day give back to the Universe – Infinitely more than I have ever taken from it. So speaks Galactus!"
— Galactus
Advertisement:

Galactus is the famed "Devourer of Worlds" in the Marvel Universe. His powers are nearly omnipotent. He has appointed a number of entities as his Heralds, imbuing them with the Power Cosmic. He uses energy from the core of planets and universal sources to sustain himself.

Sole survivor of the universe existing before the Big Bang, Galactus is perhaps the most feared being in the cosmos. Untold billions of years ago, he was born the humanoid Galan on the planet Taa, a wondrous paradise of scientific and social achievement. However, his universe was in its final stages, with all matter plunging towards a central point via the "Big Crunch", collapsing into a new "Cosmic Egg", a sphere of disorganized, compact primordial matter. Galan, a space explorer, discovered a radiation plague threatening all of Taa. Though he was initially scoffed at, the truth became clear as the people of surrounding planets perished. Despite the efforts of Taa's greatest scientists, no cure could be found, and the population began to die off. Galan convinced the handful of remaining survivors to die gloriously by flying a starship into the blazing cosmic cauldron. The others were killed by the intense radiation, but Galan was filled with new energy and saved by the sentience of the dying universe. The sentient energy spoke to Galan as it brought him into the egg.

With the next Big Bang, the Cosmic Egg matter exploded outwards, eventually condensing into stars and planets. The future Galactus and his starship were re-created simultaneously with the embodiments of Eternity and Death, though he drifted inert for billions of years while new life began to populate the universe. The starship crashed on an unnamed planet, where Ecce The Watcher saw its occupant emerge as raw energy. Ecce recognized the danger the nascent being would pose and could have destroyed him then, but instead chose to abide by his oath of non-interference. Launching his ship back into space, the being ejected its lifeless companions into the void, there to drift in endless flight. He then created a suit of armor to harness and regulate his awesome energies, and transformed his ship into an incubation chamber, where he spent countless centuries evolving into his current form. Eventually his craft again fell into orbit around a verdant planet, Archeopia. The advanced natives scanned the craft, detected its awesome energies, and wisely left it undisturbed.

Galactus initially went centuries between feedings, seeking out uninhabited worlds that could support life; but he gradually hungered more frequently, and began consuming inhabited worlds if he could find no others. He rationalized his actions by deeming himself a higher being, a belief made easier after learning of a prophecy that he would eventually compensate for all his destruction. In addition, he eventually encountered Eternity and Death, and the three beings hypothesized that Galactus represented a balancing force between the two opposites.

Lonely, Galactus created a being in his own image; however, while Galactus was content to survive, his creation craved conquest. The creation, becoming known as Tyrant, battled his creator in a struggle beyond description. Galactus eventually triumphed, possibly aided by the Spinsterhood order of women warriors, banishing Tyrant to parts unknown. Since then, Galactus has used many mindless servants, chief among which are the Punishers, possibly living beings enslaved or created by Galactus. Eventually, the world-devourer realized it was more efficient to send a herald to seek out worlds for him. His first herald was eventually cast out and imprisoned, presumably due to its corrupt and violent nature. This former herald, the Fallen One, escaped many times over the millennia, each time heading directly after its previous master, who always defeated it.

Galactus threatened to devour the planet Zenn-La, but was persuaded by native Norrin Radd to spare it in exchange for becoming a new herald. Galactus transformed Radd into the Silver Surfer, suppressing his morals so that he would lead Galactus to inhabited worlds when necessary, such as a symbiote-ruled planet, and the Kree planet Tarsis. The Surfer once even led Galactus into ending the threat of the murderous warlord Kallreich the Unconquerable by consuming a world he had invaded. When the Silver Surfer brought Galactus to Earth, despite the efforts of Uatu The Watcher to hide the planet, Alicia Masters reached Norrin's long-submerged emotions, convincing him to turn against his master. Galactus had easily overpowered the Fantastic Four, but the Surfer's power delayed Galactus' meal long enough for Reed Richards to present him with his first defeat. Uatu sent the Human Torch to Galactus' worldship to retrieve the Ultimate Nullifier, a device allegedly having the power to destroy even mighty Galactus; Reed used it to force him to spare Earth, but Galactus punished the Surfer for his betrayal by trapping him on Earth.

Soon after, Galactus sensed abundant energy sources within the enigmatic Black Galaxy, but Galactus was distracted when Dr. Doom usurped the Silver Surfer's power and crashed into Galactus' barrier; sensing this disturbance, Galactus scanned Doom, but found him beneath his notice and sent him back to Latveria. Galactus soon sent his Punishers to retrieve the Surfer from Earth; the Fantastic Four held it off long enough for the Surfer to escape into the microverse. Galactus forced them to help him find the Surfer, who located an uninhabited planet for him, after which he left the Surfer trapped on Earth for easy future location.

Galactus had a daughter, Galacta, who suffers from the same hunger issues that he has, but chooses to prevent the destruction of most forms of life by instead consuming malevolent sources that would end up destroying life if left unchecked.

The All-New, All-Different Marvel era has been a time of great change for Galactus. The new The Ultimates, an all-star team dedicated to solving cosmic problems, picked him for their first mission. They tracked down his old incubation chamber and forced him back into it, "evolving" him into a new, golden form. This "Lifebringer" Galactus, who restores desolate worlds, became one of the team's central allies throughout the book's entire run. It's all a bit ironic, considering his rampage through the Ultimate Marvel universe ended up destroying the original Ultimates. Note, by the way, that the Ultimate universe had his own one, Gah Lak Tus (for tropes about this one, see here).

Galactus appears in the following works: