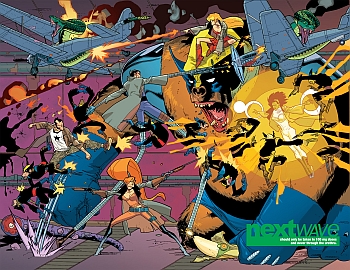 Nextwave: You must buy six copies of this comic now.
"Hey, that splash panel where you came through the window, that was just the coolest. I never get panels like that."
— The Joker, "A Black and White World", Batman: Black and White
Advertisement:

In comic books, splash panels (also known as splash pages) are massive panels (the bits that contain pictures) that take up most or all of a page, or possibly even two pages. They are an important part of maintaining a comic's rhythm, and will most commonly be seen in the first pages of a comic (usually coinciding with the title page) and the last pages of the comic, usually coinciding with the cliffhanger. The specific purpose of a splash panel is to add dramatic weight to a scene, be it a shocking reveal, a character's entrance, an establishing shot of scenery or a building, a dramatic fight scene or something else entirely. When used excessively, they can be a contributing factor in Decompressed Comics.

They are also useful when a dramatic scene requires a far more impressive sense of scale than an ordinary panel could manage. For example: A character steps into a totally unexpected underground kingdom — an open area far larger than it should be. In a normal panel, this would all just look like a bunch of shrubs with a tiny speck that may or not be the character. In a splash panel, the character can be shown in enough detail for the scale to get into the reader's brain.

If the artist needs to focus on something specific in a splash panel, he may overlay smaller panels on top of or around it that enlarge and highlight specific sections, or that provide a commentary on the larger picture.

Splash panels are extremely popular in Japanese comic books (or Manga) and entire issues can consist of characters doing not very much at all on a very large canvas. Although examples of splash panels can be found in Western comics going all the way back to the 1960's, the technique did not become popular until the late 1990's, when Warren Ellis and Bryan Hitch created The Authority, which drew on the Manga mindset to create a "widescreen" comic in which splash panels were used liberally to emphasise the wide-scale action. This ushered in an era of Decompressed Comics with very little plot but great big pictures that ran to the mid-2000's before dying out. Splash panels, especially two-page spreads, do not work very well when collected into trade paperbacks due to the crease that is now in the middle of the page. This can be especially disastrous if there are significant speech balloons or captions in the vicinity of the crease. (A rarer problem in collections happens when two two-page splash panels are an odd number of pages apart, due to there having been an odd number of advertising pages between them in the original comic. This can be resolved with a blank page, a new page of art, or splitting one page of art over two pages.)