Conqueror from the Future 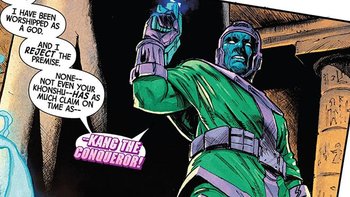 Cueball: Well, you know what they say, the past is a foreign country—
Black Hat Guy: —with an outdated military and huge oil reserves... hmmm...
— xkcd
Advertisement:

This is a character, very common in Comic Books and occasionally appearing in other forms of Science Fiction, who comes from a distant future, where the technology has advanced to the point where time travel is possible. Having found conquering his own time either too difficult or too easy, he travels back in time to the present, where he sets about using his advanced technology to conquer our world and become an Evil Overlord.

Rarely does it occur to them that, depending on exactly how the time travel functions, if they were meant to succeed, history would already have recorded it, or that they might end up screwing themselves up by tampering with time; unless, of course, they live in a multiverse. Time Police exist to stop these guys.

Sometimes this is combined with Those Wacky Nazis. For that, see Stupid Jetpack Hitler. See also Make Wrong What Once Went Right, the supertrope of time travel used for evil.

Timetagger was sent by the future Hawk Moth to get Ladybug and Cat Noir's miraculous when they were less experienced.

Timetagger was sent by the future Hawk Moth to get Ladybug and Cat Noir's miraculous when they were less experienced.