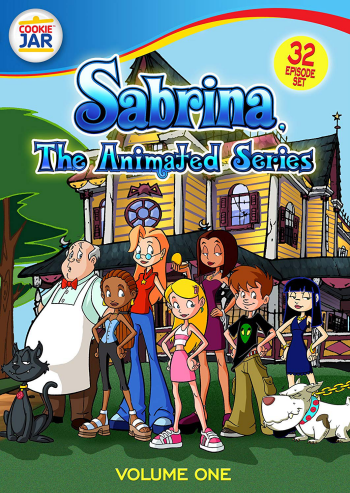 Not to be confused with Sabrina and The Groovie Goolies, this is the Animated Adaptation of the sitcom Sabrina the Teenage Witch, which itself was already adapted from a comic book by Archie Comics.

Sabrina: The Animated Series is a Belgian-American-Canadian indie cartoon. Being produced by DiC Entertainment during the time it was owned by Disney and having run on ABC's One Saturday Morning and its weekday afternoon counterpart One Too on UPN, it was oddly treated like it was as much of a show by Disney as the company's actual productions. The reruns on Toon Disney placed it in the same primetime block as Disney cartoons like House of Mouse and Aladdin: The Series, even though it was pretty obvious that this was not an actual Disney cartoon. In its original run, the show lasted from September, 1999 to February, 2000 for a total of 65 episodes.

For those out of the know, the cartoon was more like an Alternate Continuity than a prologue to the live action series as it contradicts many things. For example, in the main show Sabrina comes into her powers on her sixteenth birthday and learns that her family (save for her mother) are witches. In the animated show, Sabrina is a preteen and already has her powers, and she also knows about the magical nature of her family. In this version, Sabrina goes to middle school in between learning to use her magic. Harvey goes to the same school along with her and of course the two develop a like for one another. Her rival at the school is Gem Stone (acting as a preteen version of Alpha Bitch Libby) and her best friend is Chloe, the only human who knows of Sabrina's secret. Her aunts, Zelda and Hilda, are in this version as well but are stuck in teenage bodies for a never revealed punishment. Thus, they have to be looked on by their Uncle Quigley (another original character) till then. Salem still lives with the bunch as usual and, being an animated show, is given much more movement than his live action counterpart.

After DiC Entertainment split up from Disney, they produced a Made-for-TV Movie titled Sabrina: Friends Forever, which served as the pilot to a new syndicated series titled Sabrina's Secret Life, which was basically a follow-up to the first series. Many of the original characters from the first series were Put on a Bus or brother chucked and, since by this point DiC was no longer a Disney subsidiary, features none of the original voice actors either. In this version, Sabrina now going to high school (further contradicting the main series, but only two years younger) is now at the age where she can attend magic school as well. She quickly finds a new rival in Cassandra, who's a full witch—and will let Sabrina know it every chance she gets. Of course, Sabrina is more than willing to prove that being full blooded doesn't mean you're automatically better.

Ironically, reruns of both Sabrina: The Animated Series and Sabrina's Secret Life briefly popped up on Toon Disney for a while. Afterwards, STAS aired on Saturday mornings on CBS's Cookie Jar TV block in 2010, with SSL joining it on September 18. On February 5, 2011, they were replaced by Trollz and Horseland. From fall 2012 through October 2013, STAS aired on the "This Is For Kids" block on This TV. A playlist of the entire series is available for viewing on WildBrain's Sabrina YouTube channel here