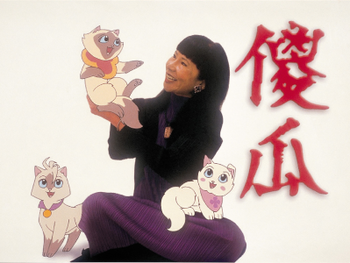 A 40-Episode Cartoon PBS Kids series set in 19th century China. As the title says, it's about a cat named Sagwa. It is based on a children's book called The Chinese Siamese Cat by Amy Tan. Sagwa and her family live in the palace of an unnamed magistrate, where her parents serve as his scribes; the calligraphy they write with their tails is much better-looking than the Magistrate's sloppy handwriting, and the kittens are learning the art as well. When they're not practicing their calligraphy (or their friend Fu-Fu the bat isn't cleaning his cave), they enjoy exploring, playing games, and hanging out in the palace's attic (which they nickname "the clubhouse").

The show gained a decently-sized demographic during its original run, and teaches children quite a bit about Chinese culture, legends, and even language. The fact that it aired on PBS made it especially popular in households without cable. Sadly for the fans, it was Cut Short after one season which aired from September 2001 to October 5, 2002. However, that hasn't stopping it from continuing to have a cult following, especially among furries. Now has a recap page in the works.

Produced in a collaboration between CinéGroupe and Sesame Workshop, which brought us Sesame Street. According to some sources, CinéGroupe has confirmed that they are planning a reboot of the series.

Nai-Nai mentions that there are other "Dragon Tales", a pretty obvious reference to another Sesame Workshop/PBS show.

Nai-Nai mentions that there are other "Dragon Tales", a pretty obvious reference to another Sesame Workshop/PBS show.