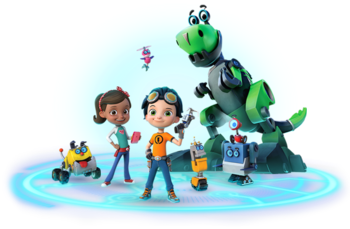 "If you can dream it, you can build it."
Advertisement:

Every episode features two shorts starring the title character Ruston "Rusty" Rivets, his companion Ruby Ramirez, and their team of friendly rescue robots. Together, they use science and technology to help the people of Sparkton Hills, using their knowledge of robotics and engineering to repurpose machinery and create new gadgets.

The series debuted in November 8, 2016 on Nick Jr. in the States and later came to Canada on January 16, 2017 on Treehouse TV. The show ended after three seasons in May 2020 for a grand total of 78 episodes.