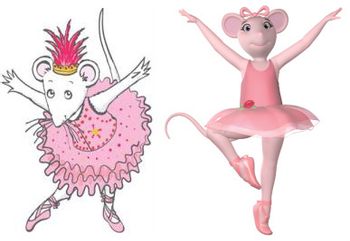 Angelina Ballerina is an Animated Series produced by HiT Entertainment, based on books by Catherine Hollabird and Helen Craig. First airing in 2002, the series is a Slice of Life type program. It features the misadventures of a mouse named Angelina Mouseling and her friends.

In 2009, the series was given an All-CGI Cartoon makeover and subtitled "The Next Steps" as Angelina goes to attend dancing school. Angelina herself received a makeover in this version of the show: She's now light pink in color. In the original series and books, she was white.

Although the TV series is not active at this time, new books based on the franchise began publishing in or around 2020, as well as reissues of the original classics. The new books revert to a more classic look for the character, rather than the pink look seen in the CGI series.

Angelina trashes her room and throws around items in a fit of jealous rage.

Angelina trashes her room and throws around items in a fit of jealous rage.