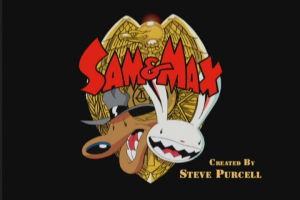 "I never dreamed we could have this much fun and still be suitable for young viewers!"
— Max
Advertisement:

Created by the Canadian animation studio Nelvana, the Sam & Max cartoon series premiered on Fox Kids in 1997 (and aired on YTV in Canada) under the full title The Adventures of Sam & Max: Freelance Police* though never actually referred to as such on-screen; the title sequence alternates between Sam & Max Freelance Police!!! or just Sam & Max and lasted only 13 full-length episodes, with 24 individual stories. The show faced some inevitable Bowdlerization in heading to children's television, but make no mistake: it was made for fans of Sam and Max first and for kids second.

During the initial 2006 run of the first season of episodic Sam & Max games by Telltale Games, the portal/publishing partner Gametap aired the episodes for free online (no longer available for viewing there). They were released on DVD in 2008 by Shout! Factory and can still be bought through Amazon

Notable for being among the first animated series to have all its episodes animated in digital ink-and-paint rather than cels.

Tropes featured mainly in the cartoon include: