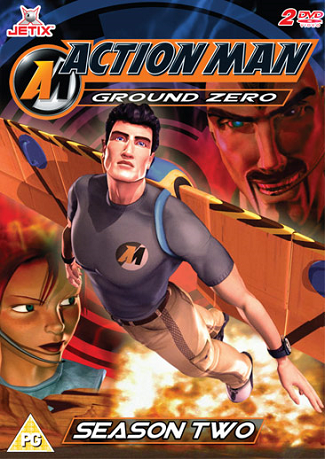 "Check it out, Dial it in, Amp it up!"
— Alex Mann's catch phrase when he triggers the Amp Factor.
Advertisement:

In 2000, an Action Man CGI series (unrelated to the 1995 incarnation) was produced by Mainframe Entertainment for YTV and Fox Kids. It follows the adventures of Alex Mann, alias "Action Man," an extreme sports athlete who discovers he has something called the AMP Factor, which is an adrenaline triggered ability that lets him analyze any situation and mathematically determine the best course of action, represented by complex equations floating around in his head while time appears to stop. Alex maintains a friendly rivalry with fellow athlete Brandon Caine, who quietly resents always coming in second to Alex. The pair are approached by the mysterious Dr. X who offers to improve upon the two with cybernetic implants. Alex refuses but Brandon accepts. Soon an altered Brandon comes after Alex and Dr. X makes it clear that he wants the secret behind Alex's ability for himself. With the help of his former high school football coach Simon Grey (who is far more than he seems) and the rest of Team Extreme (Alex plus his camerawoman, manager, and pilot), the Action Man must stop Dr. X's plans for "the future of humanity" and try to save his friend while still maintaining his career as an extreme sports star.

Tropes associated with the 2000 CGI series include: