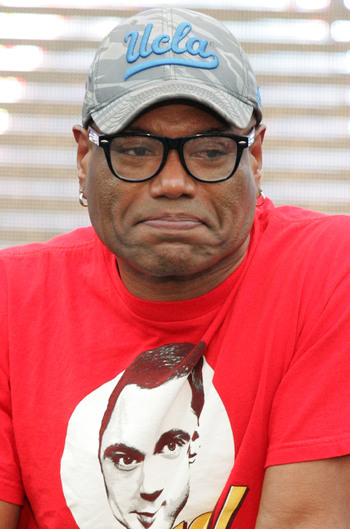 BOY.
"I've always known I wanted to be an actor. It never crossed my mind to be anything else. I think I probably decided for sure when I saw Sounder."
Advertisement:

Judge was born and raised in Los Angeles, California, and wanted to become an actor from an early age thanks to having a television for a regular babysitter. He kept his options open, though, knowing that sports would be a stepping stone to an acting career and in between playing football he considered pre-med, then psychology before settling on telecommunications and film with a minor in psychology.

His career's fuse was lit in 1989 when he joined the Howard Fine Studio and acted in small parts across movies and television, including an episode of MacGyver with future co-star Richard Dean Anderson. Eight years later, said career blew up when he auditioned for the role of Teal'c in Stargate SG-1, subsequently becoming the actor to appear in the most episodes and the de facto king of the franchise. In 2018, he became the new voice of Kratos in the God of War series, starting with the PS4 installment.

"WHAT ARE YOU DOING!? NOW THE PAGE IS LOCKED. ONLY EDIT-- *sigh* Only edit when I tell you to edit. Don't be sorry. Be better".
Feedback

Example of:
Younger and Hipper