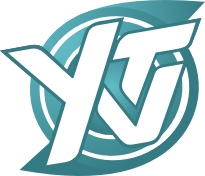 Now That's What We Call Attitude!
Keep it WEIRD!... on YTV.
— Their famous slogan
Advertisement:

YTV is a Canadian channel launched in 1988 as one of the first youth-oriented specialty networks to launch in the country. Despite this, and what its name suggests, YTV's initials do not stand for "Youth Television". YTV's current parent company is Corus Entertainment, and the network serves as the flagship brand for the Corus' Kids division.

A staple of any TV-watching Canadian kid in The '90s, YTV is known for its programming blocks hosted by PJs, or Program Jockeys, who would come in during the credits and do various things such as answering e-mails while introducing the next show. Their flagship block is The Zone, originally shown during the after-school hours before eventually taking-over Saturday mornings as well. Notable on-air personalities throughout the years have included Phil Guerrero, who was known on-air as "PJ Phresh Phill"; Stephanie Beard, who was known on-air as "Sugar"; and Carlos Bustamante, who is the longest-running host at 16 years.

The mornings featured an array of programming for younger viewers with tons of interaction from the PJs and many puppet characters who visited or lived in their lavish, treehouse-themed sets. YTV later split off another channel to cater to toddlers and preschoolers: Treehouse TV. Come afternoon, YTV was the go-to source for everything from ReBoot and Beast Wars (known on the channel as Beasties) to Sailor Moon, Doug, Pokémon, The Secret World of Alex Mack and The New Addams Family—all of which was hosted by a duo of wiseass male PJs and their gum-covered alien television creature Snit, whose screen was a giant mouth. Evenings shifted to a darker note with programming such as Animorphs, Are You Afraid of the Dark?, Goosebumps, Doctor Who's classic 1963-1989 runnote Notably, YTV was the first Canadian channel to air the racially controversial story "The Talons of Weng-Chiang" in 1990, after TVOntario skipped over it in 1980's syndication due to pressure from the country's Chinese Canadians. and BritComs such as Yes, Minister and Are You Being Served?.

Between shows throughout the day, animated shorts dubbed "Short Circuitz" would air, ranging from funny and lighthearted ones earlier in the day to darker and surprisingly wistful ones at night ("Windows,"

from The Mind's Eye series for example). YTV was also responsible for original and often low-budget shows as well, such as PJ Katie's Farm and Radio Active, and the long-running game shows Video And Arcade Top 10 & Uh Oh!. These days, most of this material is famed for its massive nostalgia factor among natives of the 1990s and late 1980s.

If YTV had to be compared to an American equivalent, it would be Nickelodeon, from which the station has imported a large amount of programming. A Canadian version, which primarily serves as a vault channel for Nickelodeon's programming, was eventually launched in 2009. YTV also served as the early inspiration for what was then known as Fox Family, after its purchase by Fox. Fox Family even had their own equivalent to The Zone known as The Basement but, in a sense of irony, much of the channel's early programming was imported from YTV's then-rival Teletoon.

Another notable aspect of YTV was that they were the primary source of anime for Canadians.note Other outlets included Teletoon, which aired movies and OVAs; the French-language broadcast networks Radio-Canada and TVA, both of which aired a fairly large quotient of French-dubbed anime during the 1970s and '80s. In addition to YTV and Teletoon, there were also other networks that aired aired mature-themed anime, but YTV was more accessible. In fact, Medabots, Bakuten Shoot Beyblade, and Metal Fight Beyblade's English versions were all produced in association with sibling studio Nelvana.

YTV's anime programming would reach its peak with Inuyasha and the Bionix block. Bionix brought several other new anime series to viewers, most of which were dubbed by The Ocean Group for CanCon (Canadian content) reasons, hitting two birds with one stone for both the meeting obligations and satisfying anime fans. They also threw in Canadian-produced CGI favorites by Mainframe Entertainment (Beasties, ReBoot and Shadow Raiders) and even Western Animation fare (Justice League Unlimited, Invader Zim and Futurama).

Come the new millennium, YTV gradually shifted its programming. Instead of aiming for older teens later at night, they would maximize the number of viewers by airing shows that would attract a "whole family" audience in the evening.

As a result, Bionix was moved to late Saturday nights and later shortened to just an hour of reruns before it was ultimately axed in 2010. YTV did acquired approval from the CRTC to launch an anime-focused channel, but the license ultimately expired in January of 2010. By 2014, YTV would let go of the few anime titles it did have, with the likes of Pokémon and Yu-Gi-Oh! being shuffled over to Teletoon—which Corus obtained full ownership of the previous year. At one point, it seemed as if YTV was losing interest in animation as a whole; even new original shows made for the channel would somehow end up on Teletoon. For a period, the most animation you would see would be Nicktoons, or reruns of YTV and Teletoon's earlier cartoons on weekdays; unless it was a movie, a new show, or SpongeBob SquarePants, you wouldn't see anything of the sort after 6 PM EST.

Like Nickelodeon, YTV still attracts a Periphery Demographic that remembers the channel fondly for its image and output from the 1990s to early 2000s. Playing lipservice to this particular audience, Nelvana launched YTV Direct

in 2015, a YouTube channel hosting both retro and contemporary content from YTV and Teletoon. YTV and Nelvana have also uploaded episodes of Nicktoons such as The Fairly OddParents, as Nelvana owns the international rights to early seasons. At one point, there was also a "retro" section on YTV's website, featuring full episodes, as well as blogs and quizzes based on older YTV programming.

For its 30th anniversary in 2018, YTV Direct was relaunched as "Keep It Weird", focusing on "weird", contemporary shows. The rest of its content was split between two new channels: Retro Rerun

, which focuses on older programming and even held a 6teen reunion special, and Cartoon Power Up

Not to be confused with Yomiuri TV,

a Nippon Television-affiliated Japanese TV station in Osaka sharing the same initials (albeit in lowercase). Incidentally, Yomiuri was the original broadcaster for Inuyasha. Also not to be confused with Yorkshire Television, an ITV franchise once commonly referred to as YTV.

The following series were originally produced for YTV (listed alphabetically):

Live-Action TV (premiere dates and production companies are in brackets)

Western Animation (premiere dates and production companies are in brackets)

Tropes associated with the network include:

After having a bit too much to drink, Fungus desperately needs a pit stop to answer the call of nature. Unfortunately for him, cold turkeys are all over the place, as he passes by numerous instances of watery imagery at every turn!

After having a bit too much to drink, Fungus desperately needs a pit stop to answer the call of nature. Unfortunately for him, cold turkeys are all over the place, as he passes by numerous instances of watery imagery at every turn!