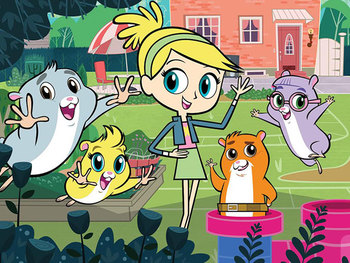 Let's ZHU this!note From left to right: Chunk, Pipsqueak, Frankie, Mr. Squiggles, and Num Nums.
"Let me tell you 'bout my friends
They're my best friends, the ZhuZhus
They can talk, dance, and sing
They can do 'bout anything!"
— Expository Theme Tune
Advertisement:

The ZhuZhus is a Canadian–American TV series produced by Nelvana and based on Cepia LLC's ZhuZhu Pets toyline. It premiered on Disney Channel in the United States on September 12, 2016, under the title Polly and the ZhuZhu Pets. Seven episodes in and one hiatus later, the show was suddenly retitled, and Polly Pamplemousse was renamed to Frankie, with all dialogue redubbed as such. In the UK, the show was seen on Boomerang, and in Canada, the show can be seen on YTV. It is notably the first TV series to be made for the franchise, and is the ninth Canadian animated TV series to be acquired by Disney Channel since Braceface in 2004 (incidentally, also a Nelvana creation).

Average 8-year-old Frankie Pamplemousse lives with her parents Stanley and Ellen, who are also door-to-door plumbers that run their own business, Pamplemousse Plumbing. But she's not alone; Frankie also owns four talking hamsters called the ZhuZhu Pets!note Also referred to as a group as the Fab Four Pipsqueak, the rebellious, loyal tomboy (and also The Leader of the Zhus), Mr. Squiggles, the scientific smart guy, Num Nums, the shy and sweet knitter, and Chunk, the stylish but slow Big Eater, accompany Frankie on her many Slice of Life adventures in the town of, well, Anytown. Recurring leads also include Cindy and Mindy Gelato, two single-minded identical twins who are good friends with Frankie, Madge, Frankie's next door neighbor and Arch-Enemy, and Mr. Kerdle, a cranky janitor who always tries to stop the Zhus from entering Frankie's school.

Along with the creation of the show, Spin Master and Cepia have worked together to rebrand the old ZhuZhu Pets franchise for 2017, with new designs for the Zhus. Airing for nearly a year, the series finished on August 24, 2017, and ended just two days earlier in Canada, with no sign of a second season.

Interesting fact: This is the first show originally produced for YTV or Teletoon to use the label "Produced in association with Corus Entertainment" instead of the traditional "YTV/Teletoon Original Production", with all YTV and Teletoon shows afterwards following suit.

On September 25, 2018, the company Cinedigm released the entirety of season 1 on DVD. The Amazon link can be found here

. The series is also available on Hulu.

The ZhuZhus contains examples of:

"Zhus it or lose it!"
Feedback

The opening theme to The ZhuZhus features a roll call of its five main characters.

The opening theme to The ZhuZhus features a roll call of its five main characters.