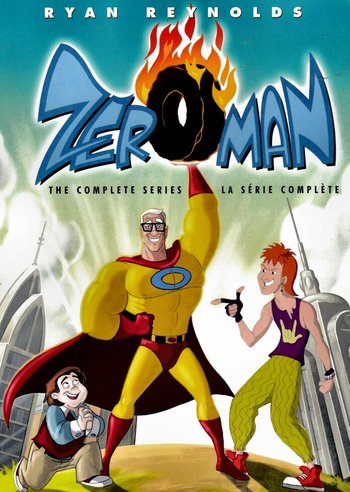 Leslie Nielsen is well-known his work in Hollywood, from serious roles like Forbidden Planet and The Poseidon Adventure to comedic ones like Airplane! and Police Squad!. However, even the most dedicated followers of his career probably haven't heard of this show.

Zeroman is an obscure and short-lived Canadian animated series that first aired on Teletoon in September of 2004. A creation of Amberwood Entertainment, the show ran to December of the same year, lasting thirteen episodes. Half made as a parody of the Superhero genre and half made as a Grossout Show, the series was made as a Leslie Neilsen vehicle from the start, following in the spirit of the more lowbrow material found in Leslie Nielsen's movies.

Leslie "Les" Mutton (voiced by Leslie Nielsen as an Ink-Suit Actor of himself) is a 63-year-old - he'll be 64 in three weeks - mail carrier for the fine people of Fair City who still lives with his mother, Jaundice, much to her chagrin. So, yeah, not the most exciting man in the world.

That is, until a giant flaming O flies through the air!

From there, Les flees to the toilet and takes the poop chute to his lair, becoming Zeroman, sworn protector of the city. With the help of his Mission Control, Ty Cheese (voice of Ryan Reynolds), and his faithful sidekick-still-in-training O Boy, Zeroman takes to the streets, fighting villainy wherever it may rear its head.