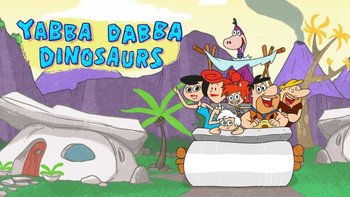 We're yabba-dabba-doing it all again!
Advertisement:

Yabba Dabba Dinosaurs is an animated series in The Flintstones franchise, the first to feature the characters since Cave Kids in 1996. It is produced by Mark Marek, creator of MAD and KaBlam!'s Henry and June shorts.

The show focuses on an aged-up Pebbles Flintstone and Bamm-Bamm Rubble, as well as the Flintstones' pet dinosaur Dino, and their (mis)adventures in a newly-introduced Wild Wilderness setting known as The Crags. Meanwhile, back at Bedrock, Fred and Barney get into zany sitcom antics reminiscent of the original 60's show.

After a number of delays, the show was set to premiere on Boomerang in 2020. Unfortunately, it was unceremoniously cancelled in 2018 before even getting to air, dooming it to being a Short-Runner. In 2021, more than three years after said cancellation, it was announced that it would finally be making its US-debut via HBO Max on September 30th as a "Max Original." The final episodes were uploaded to HBO Max as Season 2 on February 17, 2021. Before that, it had been able to get all its episodes broadcast in select countries.