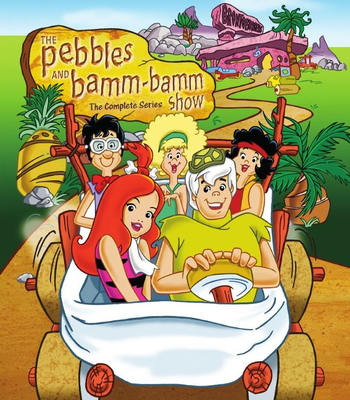 Five years after The Flintstones ended, a Saturday Morning Cartoon spin-off was created by Hanna-Barbera for CBS with the two toddlers, Pebbles Flintstone and Bamm-Bamm Rubble, as teenagers. Fred and Barney were relegated to supporting roles, as were Wilma and Betty. Many new characters were introduced, most of them teens who served as friends or foils to Pebbles and Bamm-Bamm.

The voice cast included Sally Struthers as Pebbles and Jay North as Bamm-Bamm.

The Pebbles and Bamm-Bamm Tropes: