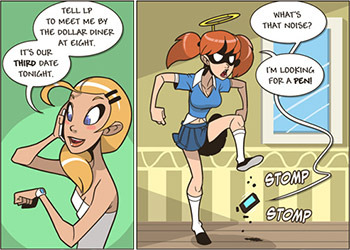 "Never let a beautiful woman pick your path when there is a man in her line of sight."
— An old proverb among women according to the Sword of Truth books
Advertisement:

This is when somebody tries to ruin someone else's romantic relationship or marriage.

There are various reasons someone might do this. One of the most common is that the saboteur is in love with one of the people in the relationship, and is willing to stoop pretty low to "correct" this situation. (In extreme cases, they may even try to Murder the Hypotenuse.) A non-romantic version of this arises from Friend Versus Lover situations, where a character is rivaled over by his/her best friend and the Love Interest. Alternatively, it could be that they just want Revenge for something, or that they want to free up one of the parties for a bit of gold digging, or that they're simply bitter that someone else is so happy and they're not. Sometimes, they may even be acting from a genuine, well-intentioned, and possibly even accurate belief that their friend has made a poor choice or should have chosen someone else.

The range of techniques available to a relationship saboteur is similarly varied. Lying is popular - you just need to make one half of the relationship look bad, such as by fabricating evidence of an affair or trying to make them flunk a Fidelity Test. It could be as simple as giving deliberately lousy relationship advice. If the relationship is fairly new, being a deliberate Moment Killer might be an option, and might prompt the saboteur to follow the targets on dates.

See also Break Up Demand for a different method of achieving the same goal. If a character simply makes their dislike of the pairing known, it's probably just a Shipping Torpedo. A specialized variant is Please Dump Me, where people try to surreptitiously sabotage their own relationship (because they don't want to end it properly for some reason), and the Intentional Heartbreaker, who goes into a relationship with no intention to see it through. Another specific variant of this trope is Kids Play Match Breaker, which is specifically for kids trying to sabotage any new relationships of their single parents. Contrast Shipper on Deck, where someone is trying to create a relationship rather than destroy one. Please know that there are instances where saboteur is a Karma Houdini and gets away with the deed. See Love-Obstructing Parents when a parent displays this behavior.

Mushu attempts to break up Mulan and Shang to avoid losing his position as her guardian.

Mushu attempts to break up Mulan and Shang to avoid losing his position as her guardian.