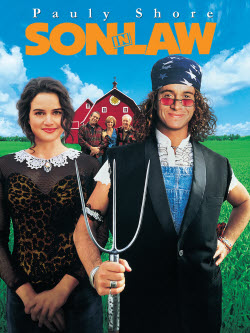 The film starts as a typical Fish out of Water story. Rebecca "Becca" Warner (Gugino) is a farm girl from South Dakota. She is just starting her college life at the University of Los Angeles, where the local ways of dressing, acting and partying confuse and scare her. By the time Halloween (October 31) arrives, Becca is seriously thinking of dropping out and running home. Enter resident advisor Crawl (Shore), a Surfer Dude who is willing to help Becca adapt to her new environment. He talks her into having a makeover and helps her learn to have fun. She now loves California life.

When Thanksgiving break arrives, Becca worries about returning home; her boyfriend Travis (Gauthier) has hinted at a marriage proposal, and her parents fully expect her to settle down with him. She actually dreads that thought. When Crawl admits to having no family of his own, Becca invites him over to spend the holidays at the farm, and effectively introduces him as her new boyfriend. He catches on and claims they are already engaged, angering Travis and and shocking her family.

Now Crawl has to win over conservative dad Walter (Smith), timid mom Connie (Pickett), and little brother Zack (Renna), face the revenge schemes of Travis and farm hand Theo (Burkley), and face temptation in the face of local hottie Tracy (Thiessen). Because Crawl is seriously falling for Becca, even if she is unaware of it.

The film is often mentioned as a pretty decent comedy, with Crawl rated as one of Shore's most likeable roles. Professional critics are less favorable to it; Roger Ebert pointed that Crawl is "one of those narcissistic cool guys who speaks in a monotone", making him hard to like, and said he found himself sympathizing with the parents who don't trust this prospective son-in-law, while James Berardinelli complained about the film having few laugh-out-loud moments and having an ending which gave him a "sugar shock". In any case, the film performed decently at the box office, earning about $36.5 million in the United States market, where it was the 42nd most successful film of its year.