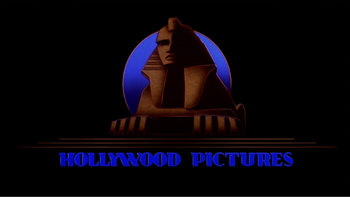 Hollywood Pictures is a dormant label (or "banner" in Disney-speak) created and owned by The Walt Disney Company which released films aimed for more mature audiences than the Disney branded fare, like fellow label Touchstone Pictures. True to its name, most of the films made by Hollywood Pictures featured personalities who were very well known both behind and in front of the camera.

Hollywood Pictures was originally founded by Disney's then-Chairman and CEO Michael Eisner in 1989 to create internal competition with the output from the Touchstone division. It began its life in 1990 with a number of films ranging from major flops to modest hits at the box office. Hollywood Pictures met its two breakout hits in 1992: The Hand That Rocks the Cradle, a psychological thriller, and Encino Man, which began a relationship with comedian Pauly Shore that continued for much of the early-to-mid-1990s. 1993 was marked by a major hit (the western Tombstone), a major flop (the film version of the long-running Super Mario Bros. franchise), and a critically acclaimed film (The Joy Luck Club). However, none of this particular trio did much to outweigh the division's anemic box office record. In 1994, Ricardo Mestres, the first president of Hollywood Pictures, was booted out and replaced by Michael Lynton. His era was marked by an association with PolyGram Filmed Entertainment that would pay off handsomely with the release of Mr. Holland's Opus, and the era also yielded seven of the division's most critically and/or commercially successful films (Quiz Show, Dangerous Minds, Crimson Tide, While You Were Sleeping, The Rock and Evita) along with a decidedly more controversial film called Powder.note Unbeknownst to the company, its director, Victor Salva, was a convicted child molester; the victim of his case, Nathan Forrest Winters, ended up leading a boycott of the film, and Salva was never rehired by Disney. In 1997, Lynton left Disney to work at the Penguin Group, a move that could not have come at a worse time, as, at the box office, Hollywood Pictures only scored one clear hit (Grosse Pointe Blank) for that entire calendar year. This led Disney to reduce its release schedule to just three films a year, most of them utter failures. Not even the mammoth success of The Sixth Sensenote the breakout film of M. Night Shyamalan and the second-highest grossing film of 1999 was enough to convince Disney to give Hollywood Pictures a second chance. On April 6, 2001, Hollywood Pictures released its eightieth film, Just Visiting, then was quietly folded back into the main Disney company.

In 2006, Disney reactivated the label as a vehicle for low-budget genre films, based on the successes of similar operations by the Hollywood majorsnote Sony's Screen Gems label, the Universal-distributed Rogue Pictures, and the Fox Searchlight Pictures division Fox Atomic., after the now-disgraced Weinstein brothers left Disney, taking Dimension Films with them. The last releases from the banner, Stay Alive (2006), Primeval, and The Invisible, were released during this period. The label now solely exists as a unit of Disney to handle the copyrights to and distribution of Hollywood Pictures' movies.