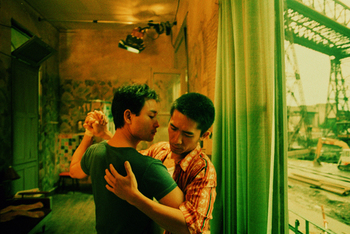 The Masochism Tango
'Happy Together'' (original title: 春光乍洩;) is a movie by Hong Kong art-house director Wong Kar-wai, and debuted in the 1997 Cannes Film Festival, where it was nominated for the Palme d'Or and won Best Director.
Advertisement:

The movie centers on Ho Po-wing (Leslie Cheung) and Lai Yiu-fai (Tony Leung Chiu-wai), a couple from pre-handover Hong Kong. They visit Argentina, hoping to renew their relationship and break away from their pattern of abuse, break-up and reconciliation.