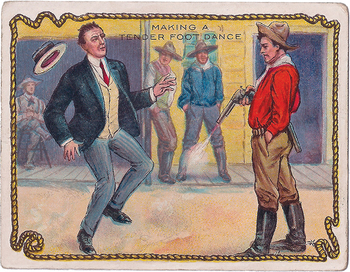 A person, new to The Wild West, who's seen as an acceptable target by the locals. By stereotype, this trope is flashily dressed in big-city fashions, thinks rural folks are idiots, and is unused to manual labor.

The name comes from "slicker" being slang for a newborn calf, indicating how naive the newcomer is about the ways of the West. Yep, it's a subtrope of Naïve Newcomer and has a strong overlap with City Mouse.

If the city slicker is well-meaning, after a couple of pranks and some honest labor they'll toughen up and learn the new rules. But if they're dishonest folks trying to bilk the locals of their hard-earned cash or land, all bets are off as to their final fate. Note that some confident tricksters will pretend to be city slickers to make themselves seem easy targets.

One act of adolescent rebellion sometimes seen in Westerns is "dressing like a city slicker."

Actually, the Old West had many terms for newcomers, and we'll list a few and their distinguishing features here until they merit their own pages.

Dude: A tourist. (As used in the term "dude ranch".) Just here to soak up some Western flavor and see the sights. Plans to be going back East in a few weeks. Generally not malevolent, but can be pushy and inadvertently offensive.

Greenhorn: Less emphasis on the flashiness and snobbery, more emphasis on the naivete. The Greenhorn wants to do the right thing but doesn't know the ropes yet. Usually grows into a hardened veteran of the West.

Tenderfoot: The emphasis here is on the soft skin and weak muscles that city life cause. Expect this character to get blisters and be exhausted after even the least demanding chore. Like the Greenhorn, he'll soon toughen up and learn the value of hard work.

Tinhorn: Almost always paired with the word "gambler." The Tinhorn plays down the naivete and emphasizes the flash and surface wealth. Generally a malevolent figure, though easily vanquished.