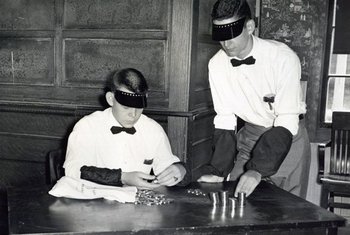 An old-fashioned clerical worker, especially in the fields of bookkeeping and correspondence.

Prior to the invention of office machines, all number crunching, preparation of documents and correspondence and copying of previously made documents had to be done by hand. Thus a business enterprise of any size had to have a number of workers specifically to create and deal with all the paperwork. They had a number of names and titles, but the one we're using here is "clerk." The term originally comes from the Catholic Church's clergy (singular: cleric), the major source and employer of literate people in Western Europe during the Middle Ages. Note that in British English, it is pronounced "clark."

The clerk is often a supporting character in fiction, making the business run smoothly while the owner or manager has more interesting adventures. If a clerk is the main character, the theme of the story will often be the tedium of the job and the wacky characters they are forced to work with. Beginning in the latter half of the 19th Century, women start being hired as lower-level clerks.

Often is used as a Meek Townsman when one is needed in The Western. The modern equivalent is the White Collar Worker. For store clerks, see Shopkeeper.

Not to be confused with the Kevin Smith movie, Clerks.