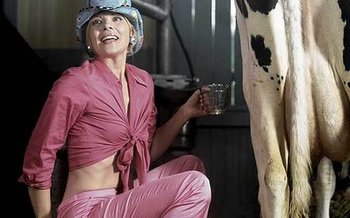 "Which button do I push?"
"You have city hands, Mr. Hooper. You been countin' money all your life."
—Quint, Jaws
Advertisement:

Demanding, often female, often found as a Fish out of Water on a farm somewhere with disturbingly large and invasive livestock; she may be quite literally out of water where there is no indoor plumbing. May have come to the country overconfidently assuming that The Simple Life is Simple. If female, expect her to frequently complain about breaking her nails. Unlike the Country Mouse (her foil counterpart), usually is the recipient of, rather than the deliverer of, An Aesop.

Frequently overlaps with Naïve Newcomer and Fallen Princess. Particularly if a camping trip is in effect, the Bratty Teenage Daughter usually acts this way (with or without the Fancy Camping stuff).

A Sub-Trope of Rich in Dollars, Poor in Sense.

This term and Country Mouse derive from Aesop's Fables, making it Older Than Feudalism.